Nighttime in the Enchanted Valley is spectacular. The moon comes over the mountaintop and lights up the entire valley, so you can see clearly without a flashlight. 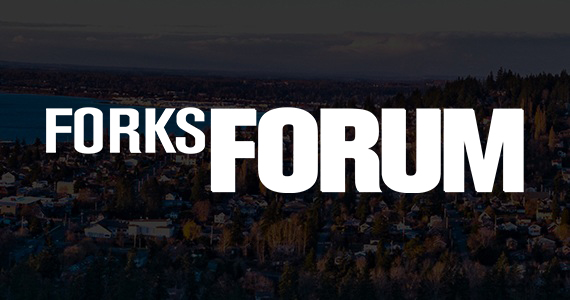 10. Forks doesn’t get that much rain. Found on an online blog on the subject of Forks, “As someone told me who ACTUALLY lives in Forks, WA, it doesn’t actually rain there very often.” Seriously?

10. I am thankful for all of the power outages that remind me to not take electricity or hot water for granted. My customers however, are not thankful for my lack of showers on these days that I am without hot water.

A list recently came out naming the most crime-filled places in Washington. Tacoma was voted the crimiest. This came as a complete shock to absolutely no one, with the exception of maybe some of the residents of Aberdeen who thought they had it in the bag this year. Aberdeen is scary, but not like Tacoma.

Forks residents are in for a real treat on Thursday, Nov. 20, when Solo Mandolin X Two, featuring mandolin virtuosos Evan Marshall and Brian Oberlin, perform in concert at Peninsula College. The program will begin at 7 p.m. at 481 S. Forks Ave.

The school district is asking for input on mascotting the intermediate school, or as I like to call it, “Forks Elementary School, Part II”. At first I wondered why the students at FES Part II weren’t just allowed to pick the mascot that they wanted. Then I remembered what happened the last time the kids were allowed to choose their own mascot; 9 months later, we got the Puddle Jumpers.

Join ONRC’s “Even Talks” series with Jack Zaccardo for an entertaining narrative and slide show presentation, “Logging History on the Peninsula from 1890s-1930s” from 7-8 p.m. Monday, Nov. 17, in the Hemlock Forest Room at Olympic Natural Resource Center in Forks.

When my husband Phil and I were asked to be a part of this year’s haunt, Rain of Terror, thrown by the Forks Police Foundation, we were stoked. After checking out the location there was no way we could refuse. We did our initial walk-through in the abandoned and already very eerie Quillayute Airport with Sgt. Mike Rowley. While doing so we were asked to take over the older side of the building, but we ended up with four more rooms on the newer side.

A while back I was at the police station. Just to set the record straight, I did not arrive handcuffed in the back of a police car. I was there on my own free will … and no, not turning myself in either.

Tales of a trip through the graveyard at night are a Halloween staple. What if there was a lost graveyard? A place where school children played and the identities of those buried there were long forgotten. Such a place may exist on Beaver Hill.

Shortly after moving in to our humble abode, my family purchased and installed a high-tech home security system to protect us from the lions and tigers and bears (oh my!). We live in the middle of nowhere (actually 40 minutes outside of Forks) so we need some kind of security system. His name is Tucker and he’s a year-old lab-mixed with goodness knows what else.

Bill’s challenger was very pleased with how things had gone that fine summer day in 1973 — everything had gone according to plan. He was supremely confident that no one, not even Bill, could top the numbers he had etched inside his hard hat at the end of his six hours of work he had labored this day. After all, he had fell and bucked 13 huge Sitka spruce trees with a total of 113,000 board feet, according to his figures.

Is it the chill on the backs of our necks, or the acceleration of our hearts pounding in our chests that make us watch scary movies or listen intently to stories of the unexplained? Our fundamental human desire to explore the boundaries of fear and anxiety all the while knowing we are safe and secure in a movie theater, in our living room or with friends around a campfire. With Halloween about a week away, the time is right to explore more unexplained mysteries of the West End.